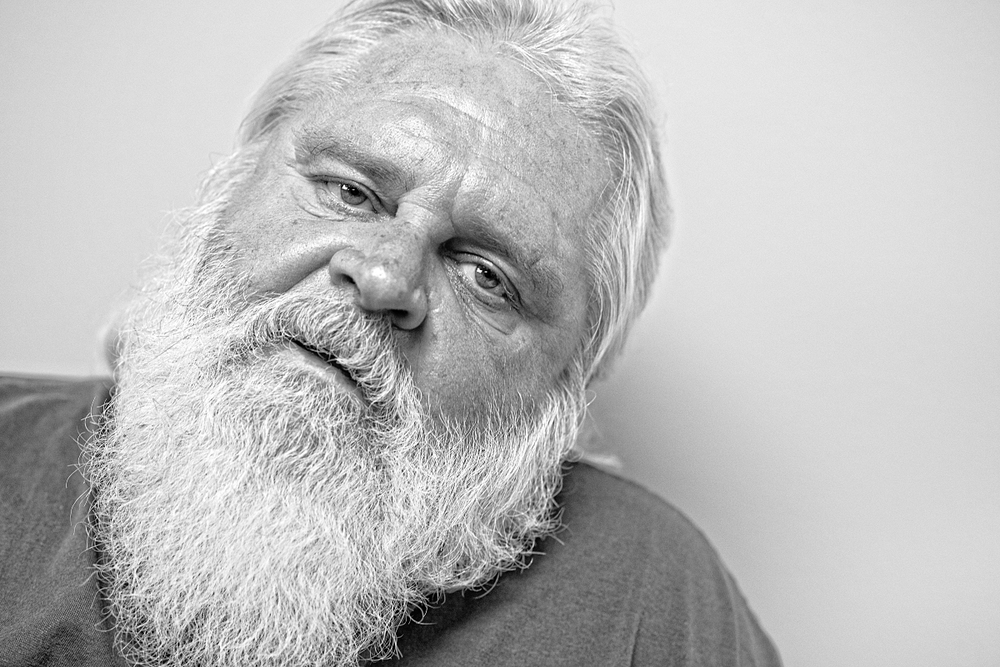 “We’ve got a good group of veterans here right now and most of them have positive attitudes, because of the situations they’re in. You know, they could be worse. They keep their heads up and keep looking forward to better things.”

“I was born in Ohio, but I lived most of my life in Colorado. I went back to Ohio and married my childhood sweetheart. We got married back in ’77, and that’s when I joined the United States Army.

I was an Infantry soldier, known as a grunt. I did my Basic Training in Fort Knox, and from there, I went to Fort Benning to do my Infantry training. They put me through a Ranger Regiment down there; a team, and they shipped me off to Vandenberg, Germany. I got out in November of ’79 after two years. It was peacetime, and there wasn’t any action, but we were on the Berlin Wall for a while guarding. There was a lot of walking involved. I was used to a lot of walking and hiking, but it was fun, just to see the Berlin Wall and realize what it was all about. There was a gate where we walked past with U.S. Soldiers on one side, and Communist on the other. We waved, traded snacks and stuff like that. We got to talk a little bit, but there wasn’t much to it. We guarded the ammo dumps. That was the only time we got to carry live ammo, besides walking along the wall. Our ammo dumps were huge there, and our missile silos, and things like that, and it was pretty interesting.

When I got out of the service, I went to work for a city street department in Northeast Ohio, and but my life was in Colorado. I’d grown up there as a kid. I had a lot of friends there and girlfriends. I tried to get my wife to move to Colorado. She didn’t want to leave home, and at that time, the second kid was on the way.

I first went to Colorado and lived in the Denver area, and after Denver I moved south, down to Pueblo, Colorado. A little, steel mill town and went to work down there as an electrician in the steel mill, and went to the hot band plant. They made railroad tracks.

I ended up getting married again. We lived happily in Colorado for years. Then, I don’t know, my mental state just, you know, it might have been part of my drinking problem. I had a drinking problem. My mental state just went out of whack, and I became bipolar, had a touch of PTSD, and I just had a mental breakdown and ended up wanting to commit suicide. I became homicidal, and was doing crazy things, and it landed me in jail a couple of times.

I was traveling, and I ended up in Georgia to visit my daughter, and I came back up to Knoxville after I visited my daughter, stayed down there for a while. I was in the Homeless Shelter for about two months. Then stress and my mental ability went flat again, and I just lost control and had to call somebody. I called the Crisis Center, and they brought me up here to Johnson City to the Mountain Home Hospital, and evaluated me for a few weeks. They sent me into the Dom, put me through a mental, mental phase or they put me through a SUDP, and they put me through the mental part of the Dom area, and had me evaluated and tested. They found me stable enough to come out to the environment.

I was up there for a little over ten weeks, then they sent me here, and I’ve been here for the Grant Per Diem Program for a year today, as a matter of fact. 9-11, 9-11 has been pretty successful for me here. Dom is another housing facility at the hospital, at the VA Center and Mountain Home, and they house in two main rooms, have a big cafeteria in there, and that’s where they hold all their classes for drug and alcohol. They have all kinds of doctors on hand, doctors, psychiatrists, psychologists, mental doctors, medical doctors. They have all that in one little facility there and the houses. They used to house about three hundred veterans, but now they’re down to a hundred and some. I believe they put in more office space, and made less room for the veterans, and I don’t know why they did that, but that’s the way it come out to be, and actually it’s a real nice place. I’d recommend it to anybody that’s having a problem to try to get in that program. It’s a good, clean, and healthful environment, with a lot of good doctors and people to take care of you there.

I’ve been to a couple of hospitals. I went to the VA in Denver once, and it was a big waiting line. That was probably back in the eighties. From there, I kind of stayed away from the VA part of my [care] , and went to just hospital doctors, doctors on the street, and stuff. My next visit to a VA Hospital was Charleston, South Carolina, from there I went to Georgia, from Georgia I went to Decatur, from Decatur to Pittsburgh VA Hospital, back to Decatur, and then I ended up here.

So, for about the last ten years I’ve been on the east coast going to VAs, and has been the best one ever taking care of me. They have checked me the best for my health and found out I had an aneurysm. I just went through cancer treatment, colon and prostate cancer treatment. I went to radiation for nine weeks, forty-five days, every day it was straight in a row, and my levels are coming down. Everything looks good so far, and then I’ve just got to worry about my aneurysm. They don’t want to operate on me yet, put that stent in there. It’s not big enough yet, I guess. But I’m thinking, why let it get bigger?  It might bust. You know, I don’t wanna die!

I think the country can do more. I think we can provide better housing, more housing for us. I mean, go rent a house across the street, put four or five veterans in it. You know what I mean?  Let them run the household. Just come in with a counselor a couple of times a month or week or so. See how things are going or have the doctors stop by. If they do that, or have them go to the hospital for their mental health evaluations, and monthly visits, and things like that, provide transportation. The Salvation Army provides our transportation here at Grant Per Diem, part of it pays for it. I think we should have our own DAV van, which would be a good idea, but we don’t have that unfortunately.

I’m fifty-seven. I’m kind of invested in a pressure washing business with my daughter and my son-in-law, and a year from now I’ll probably still be here in Kingsport because I get my best care that I’ve had in Johnson City, in Mountain Home. They’re the most caring people that I’ve met in the VA system in the last ten years. They’re the ones that found my cancer for me, and you know I’ve been here long enough, and went through all the prognoses. They discovered all this and I’m just happy they did, you know?  In time, I’m ready to get it all taken care of, so I’m going to stick around this area. I plan of getting housing here soon. William’s looking to help me look for a home now. I’m looking for subsidized housing though, and there’s not too many of those around here, I guess. And I have a background for being in jail, felonies, and things like that. So you know, but it’s going to be a little rough, but I think I can manage it. I’ve never lived on my own before, always had a wife or my kids. I lived with my daughter for a couple of years. I’m gonna be on my own. I don’t know if I’m really looking forward to it or not. I hope the people stop by and visit is what I’m saying I hope they don’t give up on me, and say, ‘Screw the old man. Let him live on his own.’ I’ll be able to manage it.

I’ve got crafts. As a matter of fact, we’ve got some from the DAV fellow, Sam, today. He brought us in a bunch of leather crafts to do, and plus I get crafts in the mail, once every couple of months from the Homeless Veterans Program that they have. It’s from the people out in the world that can afford helping out the veterans, hospitalized and mentally challenged. I get crafts and I do craft work, and there’s always a big screen TV, that and I’ve got a little workbook over there, my addiction plan to work on. Oh yeah, plenty to do. Plus, I drive other veterans when the van’s not running around. They need to go places, like to the store. That’s where I just came from. I took two veterans down to the thrift store to get some clothes, so I look out for them that way, too.

I’ve had a good attitude since I’ve been here. This is a pretty positive place, too. William, I don’t know if you’ve met him. William Ellis. He’s our caregiver and pretty much our handyman and everything else here, plus our Grant Per Diem official. He keeps you with a good attitude, because he has a good attitude most of the time. We’ve got a good group of veterans here right now and most of them have positive attitudes, because of the situations they’re in. You know, they could be worse.

They keep their heads up and keep looking forward to better things. I can’t say it’s the medication, because my medication has bothered me and I haven’t been taking it here regularly, and the doctor is taking me off of it slowly. He said take half of it now, you know just in the evenings instead of taking it during the day, because I start feeling weird on them, and I want to go out and do things that I shouldn’t be doing. It just makes me feel that way. But my attitude, I’m glad I have a positive attitude. Everybody around here seems to love me, and I take care of the children down here every Tuesday. Me and another lady veteran here, we cook for the kids, and the John 3:16 program they have here for the children. We take care of them.”

About the Author: darrell

ARCH temporarily closed through March 31 due to Coronavirus. CLICK HERE FOR DETAILS >

ARCH will be closed March 17 through Tuesday March 31 due to the Coronavirus. If this changes, we will post new details here.